A private WAN is a connection that is dedicated to a single customer. This provides for the following:

A public WAN connection is typically provided by an ISP or telecommunications service provider using the internet. In this case, the service levels and bandwidth may vary, and the shared connections do not guarantee security. 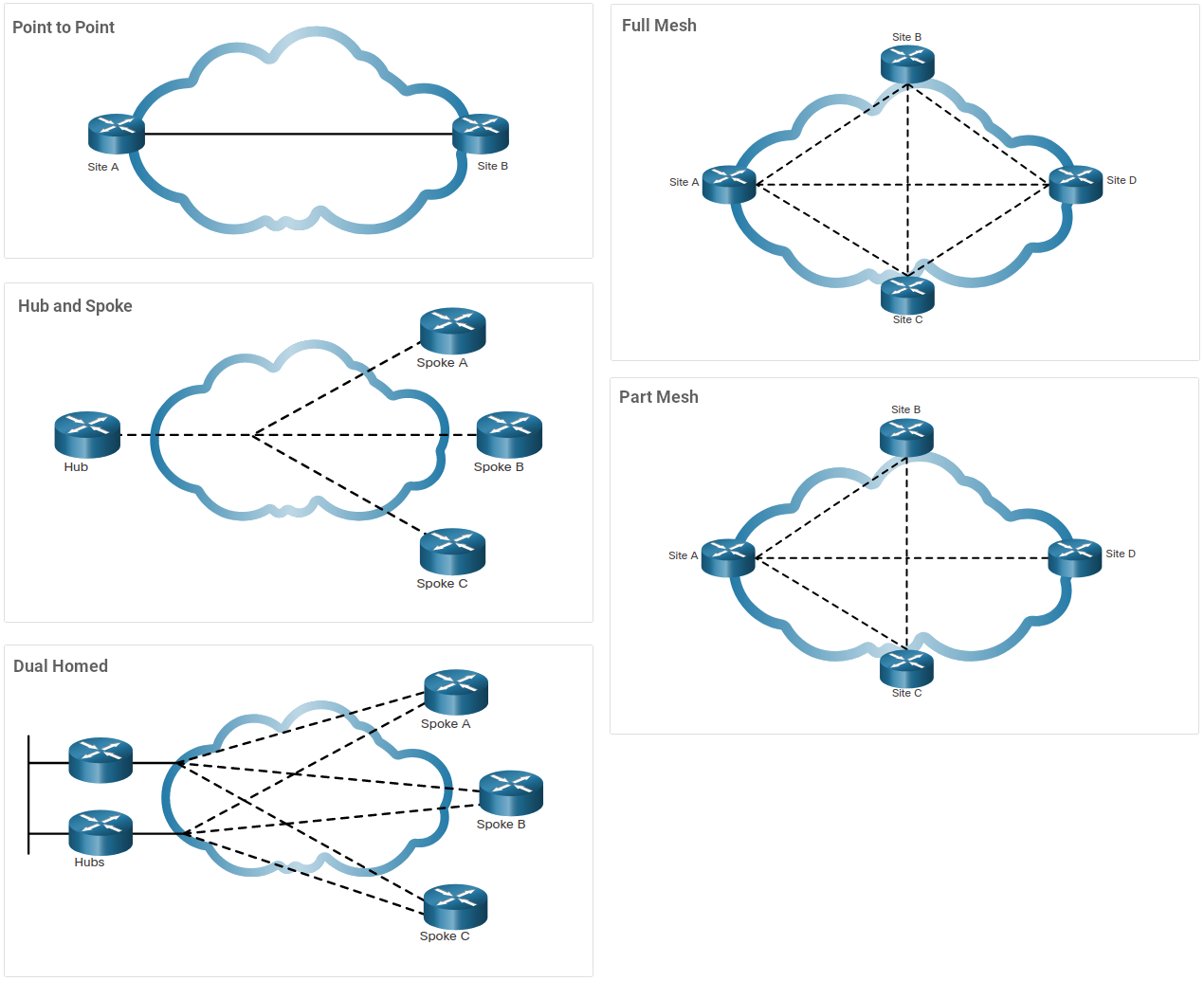 Note: Large networks usually deploy a combination of these topologies.

Dual-carrier provides redundancy and could be used to improve network performance or load balance traffic.

WAN standards are defined and managed by authorities including: 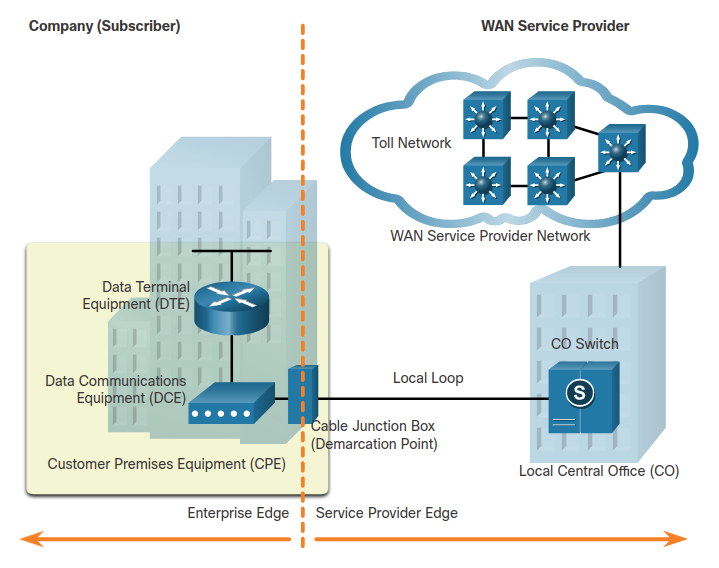 A circuit-switched network establishes a dedicated circuit (or channel) between endpoints before the users can communicate. For example, when a user makes a telephone call using a landline.

The two most common types of circuit-switched WAN technologies are: 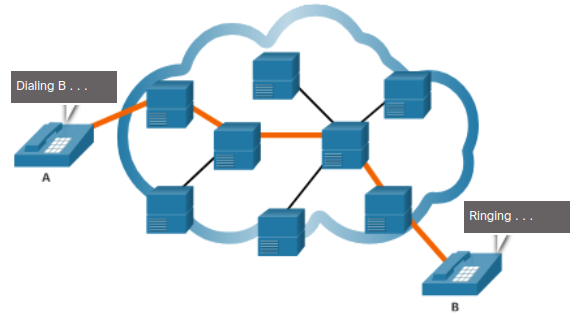 In contrast to circuit-switching, packet-switching segments traffic data into packets that are routed over a shared network. 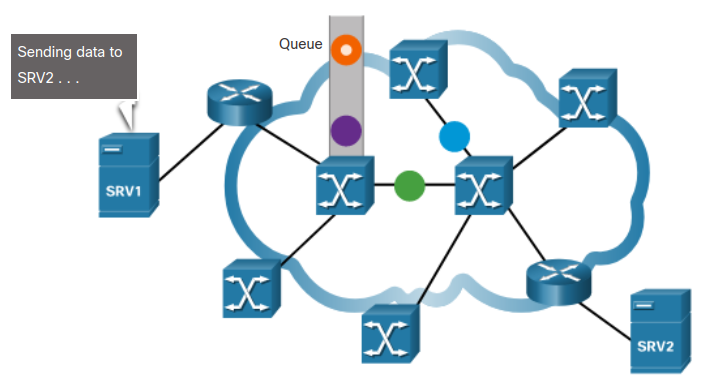 Fiber-optic cable is far superior to copper cable for long distance transmissions due to its much lower attenuation and interference.

Both standards are essentially the same

DWDM has the following features: 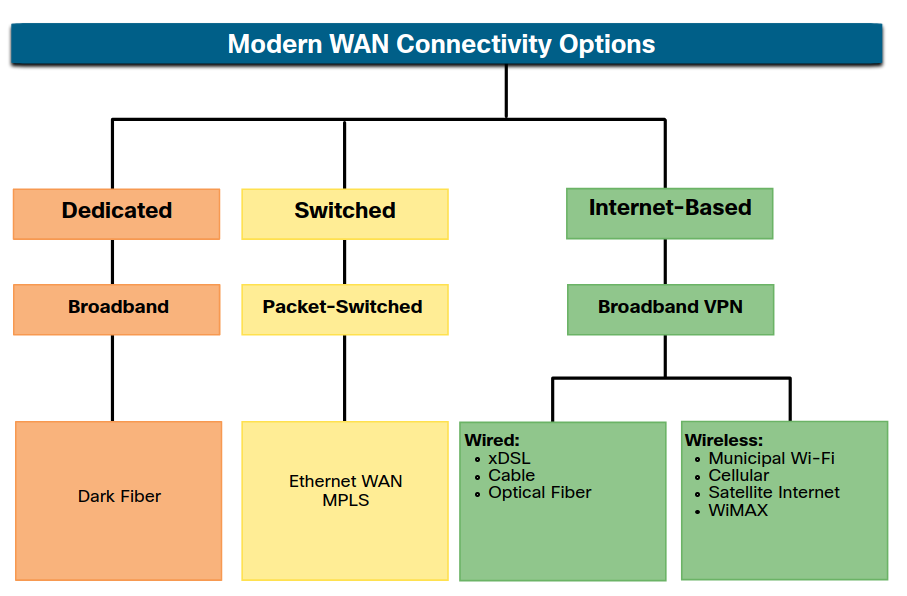 Leasing dark fiber is typically more expensive than any other WAN option available today. However, it provides the greatest flexibility, control, speed, and security.

MPLS routers are label switched routers (LSRs). This means that they attach labels to packets that are then used by other MPLS routers to forward traffic.

DSL connections, connect to a DSLAM (DSL Access Multiplexer) located in the CO.

DSL is not a shared medium. Each user has a separate direct connection to the DSLAM.

The Data over Cable Service Interface Specification (DOCSIS) is the international standard for adding high-bandwidth data to an existing cable system.

HFC uses fiber-optic and coaxial cable in different portions of the network. For example, the connection between the cable modem and optical node is coaxial cable

The headend contains the databases needed to provide internet access while the CMTS is responsible for communicating with the cable modems.

Providers install fiber-optic cable to the user location. This is commonly referred to as Fiber to the x (FTTx) and includes the following:

FTTx can deliver the highest bandwidth of all broadband options.

The following are several benefits to using VPN:

VPNs are commonly implemented as the following: